Vista Beta: That Was Quick

I finally got fed up with all the slowness. I have 512MB of RAM and a 2.0GHz Pentium 4, and I was having trouble doing more than one task at a time, and that's with all the indexing and Windows Defender off. It was pretty, but my CPU was at 100% most of the time swapping out a 900+ MB page file. 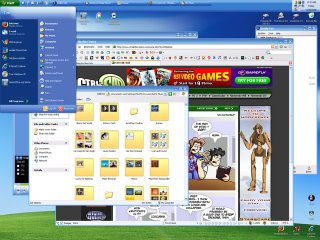 Everything is back to normal thanks to my external hard drive and a stack of CD-ROMs. Just my luck though, the day after I reinstall everything they come out with a new version of OpenOffice.org (2.0.3) and MSIE 7 Beta (3). 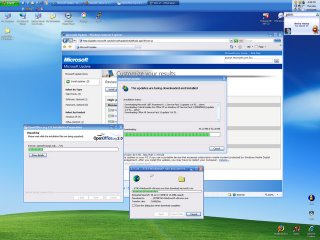 Okay, well, no, it's not quite snappy: it's still a bit slower than XP, but with the Appearance Settings set on the Windows Standard theme in stead of Windows Vista Basic, the performance hit is much reduced. Standard looks like Win2k, which is a step down from the TabletPC theme I had installed on XP, which looked like Vista as far as the taskbar went, only it was blue in stead of black. Too bad I didn't think to take any "before" screenshots. Actually, I liked the blue better. If there was a setting to make it look like XP I would try it, but I guess they aren't giving you the option to make Vista look like XP. That's probably a good marketing decision. 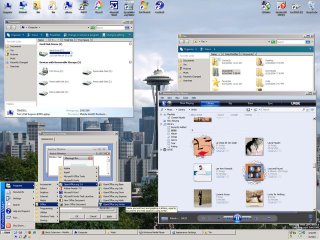 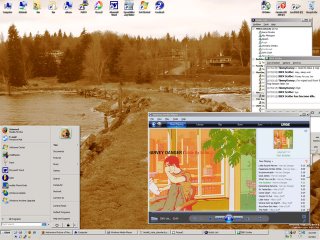 The background pictures are mine. Sorry they're such low resolution. 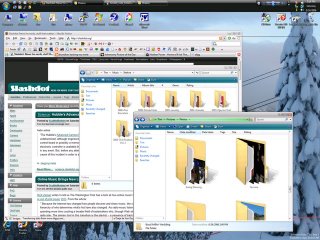 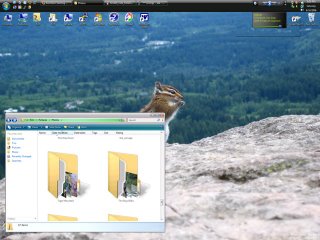 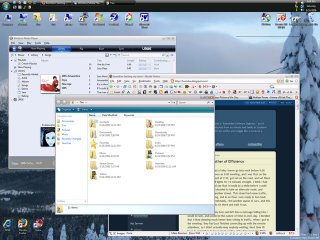 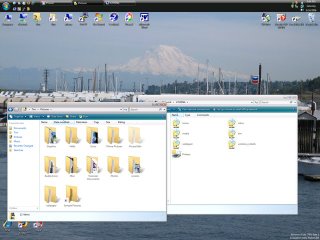 Vista Beta: The Good With The Bad

As I've mentioned before, my laptop is not the latest piece of hardware, and so my Vista experience has been sub-optimal. If I have too many things going on, it slows to a crawl. Sometimes Windows Explorer restarts itself. When I open, close, drag, or in general interact with windows, they flicker and sometimes disappear. It feels like when I installed the enhancements that came with MSIE 4.0 on our old 133MHz Win95 machine: the one that made it look and feel like Windows 98. Yep, I was a geek back then too.

There's this fancy new feature where directories look like file folders turned on their sides with sheets that look like the documents and images inside. It's a bit like the thumbnail view from XP, only much, much more resource intensive. Linux does something similar (and I hear so does OSX), but without so much crunching on the hard drive and stuttering of the GUI. If I get fed up with all the crunching, I might try the "classic" look and feel, which hopefully will perform on par with XP on the same hardware. I would hate to think they made Windows less efficient at the same tasks, but it's been known to happen.

I like the directory structure of Vista a lot better than previous versions of Windows. It's more unix-like. There's a "Users" directory, which is a lot like the "Documents and Settings" directory, except it's shorter and has no spaces. Each user has a folder in this directory, but in stead of a "My Documents" folder, they have a set of folders for different kinds of files, like Pictures, Documents, Music, Saved Games, etc. The difference is subtle, but I count it as an improvement. I also noticed something interesting: application data is split into three categories: Local, LocalLow (for less CPU-intensive operations?), and Roaming. This means applications can save settings that are hardware-dependent, and settings that are user-dependent separately.

Windows Media Player is at version 11 in Vista. It's a lot prettier and smarter than v.10, and once it finally assimilates all my music, it should be great... waiting... still waiting. It's taking a long time for some reason. WMP 10 would have torn through my 11GB of music in less than half an hour, but I guess v.11 is doing more crunching on each file. Of course I've been doing other things, and I turned the indexing back on. It's a one-time thing, which will hopefully result in better performance later on. Of course, Microsoft came up with their own media store that they integrated into the software. *yawn* It still has a few bugs in it. I have it on random play, and sometimes it starts a song and after a few seconds changes its mind and starts another song. It's quite annoying. Also, I would prefer "shuffled" playlist in stead of "random," which is what this seems to be, because I'm hearing some of the same songs repeated before others have been played.

Another bug/feature (not sure which it's supposed to be) is that the "Programs" folder from the start menu keeps appearing and disappearing on the Desktop. When it appears, you can't delete it: there's no way to get rid of it. You just have to go about your business until it disappears again. Strange. Speaking of the Programs folder, I wish they had implemented a feature to select a subfolder to put a program's folder at install-time. Gnome and KDE do this quite nicely automatically, and I've been doing this manually in Windows since the 95 days.
Posted by burndive at Saturday, June 24, 2006 No comments:

It's much better. I still had to disable User Access Control to keep it from popping up a confirmation dialog every 10 seconds. I turned off search indexing on the hard drive: it slowed down copying files from my external drive to a crawl (expecially when they're text files, which should be lightning fast), and it's a waste of resources, since my data is pretty well organized, and there are programs for indexing specific content, such as pictures and music that do a way better job than a generic always-on search indexer. Vista is set by default to index all external drives for searching: this is a stupid default, and I can't figure out how to change it universally. Vista is still a bit slow and clunky, but that's what I get for running it on 4-year-old hardware. The new Start menu is annoying: I reset it to "classic" style and disabled the "feature" that hides icons you don't use very often.
Posted by burndive at Saturday, June 24, 2006 No comments:

It sucks. To be fair, I installed it on my laptop, which has integrated graphics, and so the "glass" UI that's supposed to be all the rage isn't available to me. In stead, the windows are colored gray and gray, with shades of gray. It seems also that in order to show off the translucent effects that I can't enjoy, the margins on all the windows was thickened. I think it's annoying. I'm sure it looks pretty with a fancy expensive graphics card. There are other things that annoy me that have nothing to do with cosmetics. Drivers are an issue. My display was stuck at 16 colors, which made the buttons on the title bars invisible, and therefore useless. I was able to reset it to fix that, but there is no driver for my ethernet controller. My photo printer won't work in Vista, ever, since it's a model that HP has stopped supporting. The most annoying thing by far is the interruptions. Vista seems to think that giving it attention is more important that whatever I'm trying to actually do. The whole screen dims, and a single window pops up that asks you condescending questions, t and gives you options that don't cover all possibilities. The configuration settings are also re-arranged from XP, but that's to be expected. What wasn't expected was that the "My Documents" folder has disappeared, supposedly this has been replaced by indexed searching features. The folder is still there, but it's a jumbled mess of hidden and system files. Perhaps it's not as bad on a clean intall. I have my XP installation backed up, at least in theory. I'm not sure if I'll try a clean install of Vista. It may be better to wait until I get my next laptop. Vista is a bit ckunky on this 2GHz P4 with 512MB RAM. If I get a Mac, a free Vista lisence might come in handy. Macs tend to have beefy graphics cards and nice specs, but then again the cost of a Mac laptop will get you a pretty nice Windows laptop. Anyway, my current computing needs seem to be met, as long as I don't install unnecessarily bloated software.
Posted by burndive at Saturday, June 24, 2006 1 comment:

Got my Vista kit in the mail today. I'll let y'all know how it goes. I'm planning on upgrading the XP install on my laptop. I want to do a clean install eventually, so maybe I'll do that at some point.
Posted by burndive at Friday, June 23, 2006 No comments:

It's worth every penny.

Until today, I was using the subdomain athena.gentoolinux.be through freedns.agraid.org for athena's DNS. I have a neat little script that keeps track of what my IP address is, and then if it changes, it automatically updates the DNS listing for my box, and the world can keep on accessing all the wonderful pictures and such that I host there. This is all fine and dandy, but it so happens that the owner of gentoolinux.be is a bit temperamental, and so this morning athena was nowhere to be found. Oh, the IP address hadn't changed, ports 22 and 80 are still forwarded there from the router, and apache and sshd were chugging along just fine, but the DNS listing had disappeared.

I had no idea what was wrong. And I was counting on tar-ing up and transferring a Harry Potter sound track MP3 folder today. Bummer. My first thought was to interrogate RFH: he was doing something with athena after 12:30 last night, but it turns out all he did was watch an episode of "Jack and Bobby," so that was a dead end.

I didn't think to try just using the IP address until I got home and discovered everything was working just fine.

So anyway, I switched the domain from gentoolinux.be to gentoo-server.be, so now athena can be accessed via athena.gentoo-server.be. This domain is "public" at freedns.afraid.org, so hopefully there won't be another similar incident. I sent off a message to the owner of gentoolinux.be to ask him to restore my ability to use it. There are a grand total of 3 domains available for use with "gentoo" in them. It's not essential to have that in the name, but I like it there.

I updated the links on my blog template (actually, I changed it so that it only needs to be updated in one place at the top in a JavaScript variable that gets referenced several times throughout the page).

If someone wants to look at photos that have a dead link, all they need to do is click on the "athena" link on the top or bottom of the page and browse to ~tim/photos/.
Posted by burndive at Monday, June 12, 2006 1 comment: