Today I set up a webcam in the chicken coop in order to do a ustream broadcast. If you want to watch it, you can click here. The challenges were numerous, the first among them is that chickens poop on things, and I didn't want my computer equipment pooped on. Luckily, I have a small Dell computer that just so happens to fit wedged into the wall where the chickens aren't able to roost. 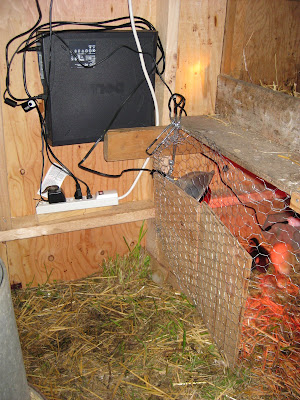 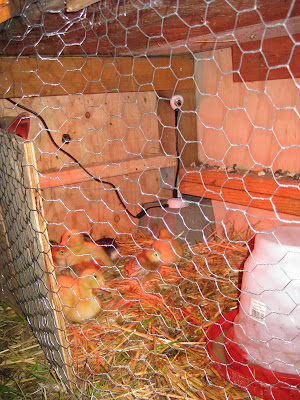 The webcam is located in the corner of the fenced-off area, optimally positioned so that it can see the chicks and ducklings when they are most active, which is during the day. During the night, they tend to cluster beneath the heat lamp, which puts them on the edge or slightly out of view, but I think the viewing angle is the best overall.

Update: I have since pointed the webcam at the spot under the heat lamp, as it turns out most of the time there are birds there. 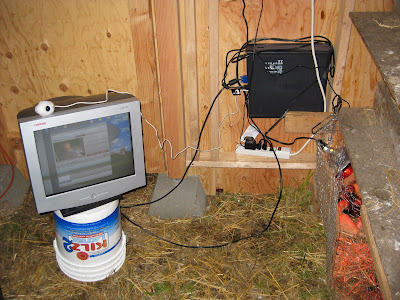 I brought the monitor in for configuration only. I didn't want to leave in in there and get pooped on, plus it would be in the way. I have a hand-held trackball instead of a mouse, since the surfaces in the coop are... less than ideal for mouse use. The mouse is also a configuration-only item.
The trickiest part of this whole thing is getting an Internet connection in the coop. Actually, it wasn't that hard, once I figured out which equipment was best to use. The Dell is running Windows 2000 Pro, since that's the license sticker that came on the case when I picked it up at the surplus store. Windows 2000 doesn't natively support wireless networking. It will work, but it treats it like regular Ethernet, with a separate configuration app. Anyway my router is in WPA mode, and neither of the two wireless PCI cards I had supported it in Win2k (at least not with the drivers I had), so I went with my other option (besides running a cable to the coop--which would be doable, but require a purchase): a wireless networking bridge. 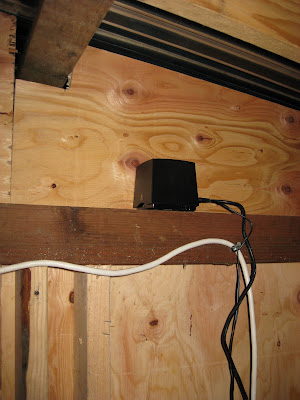 A few years back I picked up this pair of little black boxes on Woot, and they've come in pretty handy. They're supposed to have a range of 300 feet, and I have no reason do doubt it. Currently, I'm using them at about 75 feet, and they're doing just fine. The stream is live, of course, so if the chicklings are being boring, or you're reading this later on, after they're grown and the stream is gone or of something else, you won't get to see the result on the live stream. Therefore, I will post the following video, which I recorded as I was doing some final tweaks to the webcam setup, and saved it for posterity: The voice you hear at the beginning is mine. I'm on my cell phone with my wife, who is in the house letting me know that the sound is working.
Posted by burndive at Wednesday, May 13, 2009 No comments:

Software To Install On A Windows Box

With the Windows 7 release candidate out, I recently wiped my laptop's hard drive clean and installed it (I was previously running beta 2). Whenever I flatten a computer and re-install everything fresh, I like to have a list of things to install that covers the bases.

I put together a bookmarks folder of software to install on a new Windows box, and I decided to share it with the world, so here it is:
The nice thing about sharing it in this way is that I can keep it up-to-date in my browser if there is anything to add or remove, or if any of the links change.

If You're Not A Gentoo User, Move Along...

Whenever I spend time sifting through Internet forums looking for the solution to a technical problem, I like to post a description of the problem along with the solution in a straightforward manner, so that the next person who has the same problem will be able to find my post when they search. This is one such posts. I ran into a frustrating error when updating the software on a Gentoo Linux system that hadn't been updated in a while. I started with:

And when that was (finally) done, I ran:

Which uninstalled a bunch of packages. The problem came when I ran:

Nothing would emerge. Nothing. Every package I tried to emerge would end in the error:

The root problem turned out to be a bug with the way that the gcc ebuild updates from certain versions. Portage was configured to use a compiler version that no longer existed on the system. The solution was to run:

Where num above is the numerical selection of one of the items on the list output by the previous command. My gcc-config selection told me when I selected it that it had a bug with GCC_SPECS and to re-emerge it, so I did that. I probably didn't have to, but it's good to be cautious and I had a few hours to kill (this is a 1GHz Pentium III system). After that, I was good to go.
Posted by burndive at Wednesday, May 06, 2009 No comments: 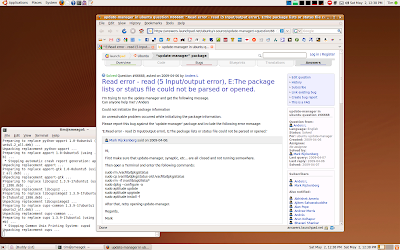 I just installed Ubutu Linux (9.04 "Jaunty Jackalope", if you must know) on one of my computers. I'd done it once before, but it was on a partition on my main server athena, so it didn't get much face time (since I would have had to reboot it, and it would be downtime for the main install). The install was really easy. I complicated things by customizing my partition table to leave room for another install, but novices don't need to do that, so it doesn't count. Trouble came when I tried to see what software was available: Add/Remove threw an error, and the commands that it recommended I enter didn't work. It was easy enough to search and find a solution that worked (which was here). Overall, I would say that it was a smashing success. I was a bit disappointed that I had to manually install the ssh server, but I guess it comes with the territory. I couldn't find openssh-server with the GUI, so I did it from the command line. I'm still not sure if it's going to load on startup, and I suppose I need to figure out how to access non-standard software repositories, but I'll leave that for a later time.
Posted by burndive at Saturday, May 02, 2009 No comments: