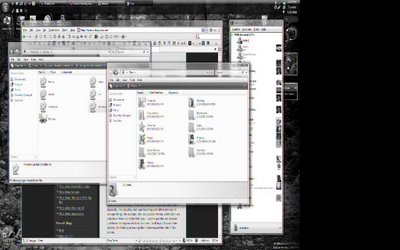 It's so pretty. I wish I could show you what it looks like. I can try, but all I get is this: I decided to do some looking into the nVidia driver situation. I found out that indeed nVidia does indeed have Vista beta drivers for my graphics card, but when I tried to install, it said my card wasn't supported.

Well, I wasn't going to take their word for it, so I did some more digging (or rather googling, since apparently both terms have developed specialized meanings), and found out that what I needed was a modded INF file with the installer, so that it wouldn't reject my card. I found such a file at laptopvideo2go.com, and the driver installed without a hitch.

Finally, I'm running at native resolution, 32-bit color, and using the illusive Aero Glass theme. So far the only thing wrong is that when I try to do a screen capture, the image is garbled as you see above, but trust me, it looks nice. So far the only other hardware issue I've run into head-on with Vista is that my printer, an HP PhotoSmart 1000 does not, and never will work with Vista. The model is no longer supported by HP, so XP is the end of the line. I got it at a thrift store for $3.99 and all it needed was a color cartridge. I don't want to have to part with it just because of an OS upgrade.

Maybe I can hook it up to Athena and I can print over the network. I've never messed with Linux printing. My Bluetooth device (BCM2045) also doesn't have a Vista driver, and there are three "Base System Device" entries in the device manager, which correspond to three of the four functions of my flash card reader. The SD card function works just fine, which is nice, because that's what I use.

Aside from hardware issues, Vista still isn't very stable. The Control Panel keeps crashing whenever I try to open it, and then I have to restart Windows Explorer, which is quite annoying. Another annoyance is when a user program tries to "open file location," i.e., open the folder that contains this file, in stead it opens the file. This happens from Firefox, Picasa2 and Photo Gallery Viewer, so I'm pretty sure it's an OS bug. "Open file location" seems to work fine when right-clicking shortcuts, though.
Posted by burndive at Tuesday, August 22, 2006